Ian has already blogged this over at eightbar… this week’s series on technology on the BBC Newsnight programme features some coverage of one of our internal discussion groups, plus footage of IBM Hursley and a short interview with Ian himself.

There’s a video (skip to around 7m30s in) – or else look for The Pearly Gates of Cyberspace here. Alternatively, you can watch it on TV tonight (Wed 10th January, BBC2, 2230 I think).

I thought I’d post a couple of screenshots from the meeting, since there wasn’t a huge amount of in-world footage. Click through for larger images.

We started off inside the house, and discussed some topics around identity and virtual worlds. I’m on the right, near the front. This was early on in the session, before everyone arrived. 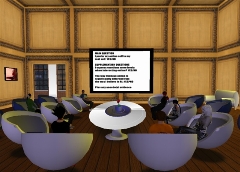 Later on, we moved outside for a more free-form discussion. That’s me on the right with the red hair… 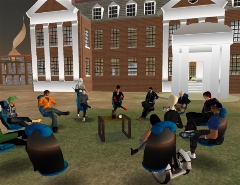