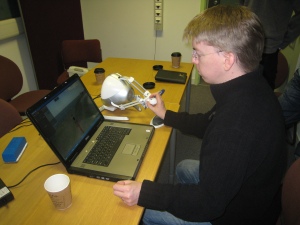 Yesterday I got the opportunity to play around with a haptic device, which basically provides a force feedback / touch user interface to various 3D technologies. These included navigating a virtual world, and building 3D objects. I’ve written about it more over on eightbar, but it was so cool that I wanted to include the video over here as well.

Just to explain what is going on in the video, as it may not be entirely clear! The demos use a Novint Falcon gaming controller. To quote Anarkik, it is “like a small grounded ‘robot’ and provides the ‘force feedback’ that gives the uncanny sense of touching a virtual object. This device replaces the mouse and also provides more natural and coherent movement in 3 dimensions.” At the start, several of us have a go with the controller to drive an avatar around an OpenSim island running on the local machine, using Anarkik’s software. Around the middle of the video, we switch to using the Cre8 tool to do some simple modelling. In particular, we change the surface hardness of a sphere (where it becomes more or less soft to the touch); and then go inside the sphere and extrude the shape by pulling the controller around. Finally, there’s a brief look at some fabricated items modelled using the same software.

By the way, this was another clip edited with iMovie 09, which I’m increasingly impressed with – I need to do a screencast to show some of the nicer more advanced features that I’ve discovered! 🙂