On the recommendation of my friend and colleague Alexis Richardson, last night I went along to the ICA in London to watch a documentary. Not at all my usual fare of sci-fi, action or comedy, but Alexis convinced me over lunch last week that Jiro Dreams of Sushi would be worthy of my time and interest. 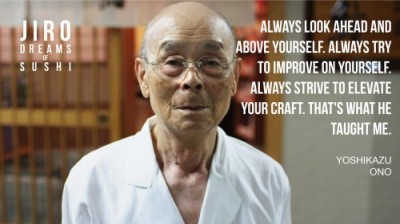 Evidently the UK is substantially behind the rest of the world in getting this documentary on release – it’s apparently available to stream on Netflix in the US already, but only arrived in the cinemas here a fortnight ago. Ho-hum.

So, in a nutshell, it’s a film about an 85-year-old man who has been making sushi for a living for 70 years, and works with his eldest son in a 10-seat restaurant in an Tokyo subway station. So far, so quirky.

A few things elevate this documentary to a far more worthy status, though. The cinematography was thoughtful and beautiful; it was nicely paced; I learned a lot about the thinking of the individuals featured. I also came to realise how what I know as sushi, simply is not what Jiro serves to his patrons. What we consume from supermarkets, chains with conveyor belts, even the “good” individual sushi restaurants I’ve visited in London, is more mass market, mass produced popular style raw fish dishes.

Jiro is a craftsman – so are his sons and other apprentices. He’s obsessive, and he aspires to be better every day.

That’s interesting, because tomorrow is the Monkigras – Redmonk’s “craft beer-and-developer craft” event – and the theme this time is Scaling Craft. Over the past few weeks I’ve been back and forth with my very good friend James Governor about the topic of craft, and how it applies in software and technology. I think, after watching Jiro, I have a far better understanding than in the past. Interestingly, afterwards I had a discussion about professionalism, chartering / accreditation, the bcs, and whether or not professions exist to act as a barrier to entry or as an encouragement towards craftsmanship, too. I wonder how those themes will be reflected throughout Monkigras this year.

For what it’s worth, I had proposed a Monkigras talk taking the concept of glass and the craft of glassmaking and applying some technology themes, but unfortunately I’ve not been able to pull it together in time this time around. I’m looking forward to learning and soaking up the atmosphere (and seeing good friends from across the community) again, instead!

Oh, and if fish and subtitles are not your taste, I’d still encourage giving Jiro Dreams of Sushi a try – if not, on a technology topic instead, you really should watch Indie Game The Movie, the best documentary I watched last year and a fascinating insight into programming, obsession, and the gaming industry.