Lost my iPhone. Those of you who know me well will understand how upsetting this is.

Three weeks ago, as I was leaving Tokyo after my first trip to Japan, I accidentally abandoned my iPhone in the back of a cab as I ran into the airport. The sinking feeling crossed with panic as I realised it was no longer in my pocket, was compounded by the fact that it carried my electronic boarding pass, TripIt itinerary with flight details, my Apple Pay wallet, lots of podcasts and music for the flight, and of course my main means of communication with home via iMessage, email or phone.

When I went back to the kerbside, the taxi had already left, and I quickly resigned myself that it was probably a lost cause.

The only other time I’d managed to leave my iPhone somewhere while travelling, was on the top deck of a late-night bus in London. When I got home, I used Find my iPhone to make it ring loudly, and the bus driver was good enough to take it to the bus station for me to collect in the morning.

This time, I was more limited — although I could still use Find my iPhone, I didn’t have time or means to do it before take-off, and my phone itself had data roaming disabled, so unless it made it back to the hotel where it had last connected to wifi, it was pretty unlikely to receive the messages to disable itself or wipe my data.

When I got back to the UK, I did go ahead and set everything as lost in iCloud, and also Tweeted, and posted about my loss on Facebook. Several people commented “hey, this is Japan… you might be surprised!”. A colleague I’d been travelling with had me send him a photo of the taxi receipt via direct message, succeeded in contacting the driver, and recovered my phone! 🙇 After that, it was a simple (!) matter of colleagues passing it between themselves until I arrived here, in São Paulo Brazil, to meet the person who was currently in possession of my device.

By the time I realised that my phone wasn’t lost forever, I’d also decided that I could avoid an insurance claim (although I probably would have used that opportunity to upgrade from an iPhone 6 to a 6S Plus, so the silver-lined cloud of Japanese kindness wasn’t as shiny as it might have been!).

I needed my phone for SMS. Most of my online accounts are protected by two-factor authentication, so I needed a way to receive text messages. I also needed to be able to do a bunch of things on the move (more on this in a moment). My initial stopgap solution was to cancel my Three SIM, get a new one, and shove it into an older iPhone 5 that we had laying around at home — annoyingly though, it was locked to a corporate Vodafone contract and my new SIM wouldn’t work! So, although I could pull down a bunch of apps and use the older iPhone on wifi, it wasn’t going to help with that SMS issue. The other solution I came up with there was to use the nano-SIM in an adapter inside my older Nexus 5 — which meant I had mobile data and SMS available, but it would be on Android. I’d be dual-wielding my mobile weapons for a little while.

My regular iPhone 6 has 438 (!) applications installed. No, I’m absolutely sure I don’t use most of them regularly; and yes, I really should get around to clearing that down; but hey, 128Gb is a lot of storage, and I use my phone for lots and lots of things on a daily basis.

I wasn’t about to restore my entire device onto a smaller, older iPhone 5, but after a fortnight, here’s what I came up with as my minimum viable set of apps I needed. 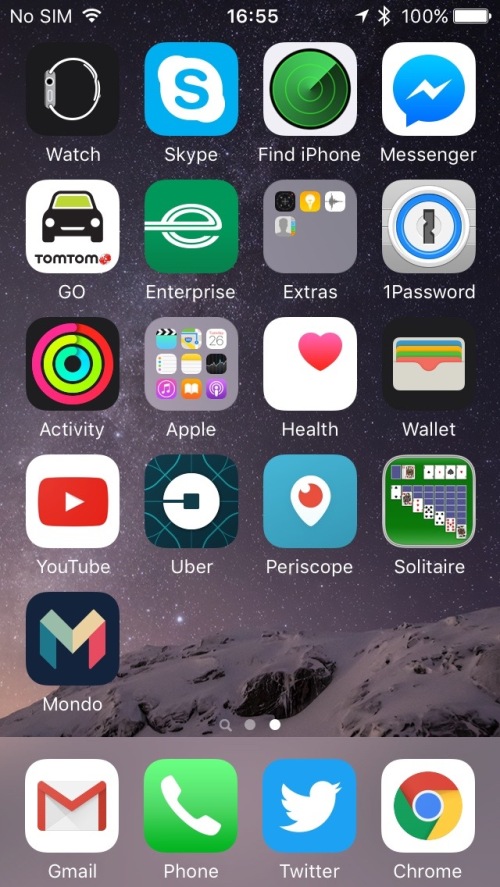 Almost the very first thing I did was to drag the majority of Apple-installed apps into an “Apple” folder, to get them out of the way (how I wish they could be removed or fully hidden).

After that, getting the Google suite (Gmail, Chrome, Calendar) installed and then back up-and-running by coordinating 2FA challenges with my Android phone, got me a long way back towards where I wanted to be. I’m a social kind of guy, so Twitter, Swarm, Facebook, Instagram and Periscope were instant re-installs, too.

In terms of other apps worth calling out here:

The other pain point I encountered in this three week digital wilderness trial, was what to do about my Apple Watch! As soon as I lost the original iPhone, I found myself unable to change the timezone on my Watch — in the Watch UI, it only locally offers the option to put the clock forward, not backwards. In the end, the only good solution I could see was to reset the Watch, re-pair it as new with the older iPhone, and then set it up again. Today, once I got the original phone back, I had to go through the same dance, although I restored from the most recent backup on the iPhone 5, so the setup wasn’t quite as annoying. Still… this doesn’t seem well thought-through, Apple please take note.

Android remains interesting and useful to me, and in particular the Lollipop and Marshmallow releases have moved it forward a long way in user experience. I support developers on many platforms, and it is important to me to have a Nexus device in my life, even as a secondary device. I’ve loved using my Nexus 5 more during these past few weeks, but I still find the plethora of messaging apps, inconsistency in finding settings, and annoying UI differences between apps outside of the Material redesign ecosystem, to be hugely irritating.

Another thing that annoyed me on both of my fallback devices was the lack of that magical Touch ID! I’m so used to just holding my phone and being able to use it, that the screen swipe / PIN dance was a big challenge to adjust back to. Amazing how quickly technology becomes part of the daily wallpaper when it is simple and useful.

That being said, it might even be time to update my Nexus to a 5X or 6P to make use of some of those newer features on that platform, as well…

Thanks to Aman, Lia, the Japanese taxi driver, and the corporate donor of my backup phone…

I just installed 138 app updates on my iPhone 6.