Why I am #HeForShe

I’m incredibly fortunate to work for a company that is one of the Corporate Impact Champions for the global UN Women #HeForShe movement, with support right from the top of the organization. There’s more about Twitter’s commitment to #HeForShe here.

I’ve worked in the technology industry for my whole professional life, and it has been an incredibly tough place for women to work – that’s just not the kind of career or workplace I want to work in, because I’m constantly inspired and influenced by women around me, be that professionally or personally.

For my part, I’m a huge supporter of this drive for equality. Over the past few years we’ve witnessed appalling social abuse through vectors such as “GamerGate” or one of the many other poor excuses that humans have found to justify their own prejudices. It is beyond time for this to Stop, and for us to move forward together.

What can I do that goes beyond mere words? I can be an Ally to friends of all genders and identities who have encountered difficult behaviour. I can point out that I support the Hack Code of Conduct for conferences and Hackathons. I am happy to work on diversity programs within the tech community and to support initiatives such as CodeFirstGirls, which Twitter has also hosted classes for.

Today, International Women’s Day, Twitter is supporting the cause with custom emojis for #IWD2016 and #SheInspires me (you’ll see them visible with those hashtags on Twitter.com today) – and what better excuse, as if one was needed, to call out various friends, colleagues, and one I’ve not even met, as role models and personal inspirations… you should probably be following them and checking out their achievements.

So hard to choose / call out my #IWD2016 inspirations – I work with, and know, so many incredible women.

#SheInspiresMe @heatherAtaylor creator, writer, musician, insightful and an incredible career of helping others and growing her skills.

#SheInspiresMe @OhMyHallyu self-taught community creator and educator, agile scrum coach, gamer… I want to be like her when I grow up!

#SheInspiresMe @janeonbike – she invented @sugru, which is basically genius. An idea and invention for remaking your stuff. Thanks Jane!

#SheInspiresMe rounding out with none other than @YAPiper – my mother – who taught me above all else to be kind to and to respect others.

Hello. I haven’t written here in a while. That’s something I hope to change.

I realise it is 6 weeks into the year already, but after a trip to California last week, my own vague ideas about what 2016 should mean for me, have solidified.

I’ve got a lot of exciting stuff to look forward to this year professionally – I’m deeply involved in a number of initiatives, and I’m excited that @jack has put Developers firmly on our list of priorities! This is where I’d always hoped we would get back to. Nevertheless, on top of that, these are three of my personal plans for the next ~10 1/2 months. I’ve made a good start.

As always, I’m open to comments here, but you’ll also find me open to discuss on Twitter @andypiper.

Some random reflections on 2014

As time has moved on, I’ve lavished less attention on my blog, which is a shame… “back in the day” I enjoyed writing for it, and gained a lot of value from doing so. It’s of no particular surprise to me that I’ve spent less time writing here in 2014 than in any of the previous years; but it is a regret. I blame my schedule, a general change in the way I interact online, and a lack of inspiration. Actually, that last one isn’t quite true: I’ve often been inspired, or felt the need to blog, but have found myself mentally blocked. I need to get over that!

The major life change this year was my move to Twitter, which has been very exciting and energising. I’m thrilled to have been invited to work with a team of exceptional people under Jeff Sandquist. In particular, this year I’ve had the short-lived opportunity to work with three brilliant and talented guys I want to say “thank you” to, for making my transition to my new role such a pleasure: Taylor Singletary, Sylvain Carle and Isaac Hepworth. A special shout-out too to my close friend and colleague based in London, Romain Huet, without whom I would have found the past nine months much less fun or easy-to-navigate! The whole team has been just amazing to work with, as have all my wonderful colleagues at the Twitter office in London #gratefulpipes

The work we’re doing on the Developer and Platform Relations team at Twitter is something I’m incredibly passionate about. Connecting with the third-party community and acting as the face and voice of Twitter with those developers, listening to them and responding to their concerns, is the reason I joined the company.

I’ve been involved in the launch of a couple of APIs (most notably the Mute API), and I’m getting to work on much of the external API surface, which plays well with my background and developer experience. We’ve completely relaunched our developer-facing website and forums in the past few months, which the whole team has worked hard on. I’m happy to see the focus of discussion on the developer forums substantially improved now that we’ve moved to the Discourse platform – the user experience is far better than we had with the previous solution.

Most importantly, this past quarter we launched Fabric, our new free mobile SDK and platform for iOS and Android, and delivered a swathe of improvements to the developer experience for mobile enthusiasts. We also ran our first mobile developer conference, Flight – I was excited to be there, and I’m looking forward to seeing that experience continue in 2015.

My background in the Internet of Things and MQTT space has partly carried over into my new life at Twitter, and I’ve had the opportunity to speak at a couple of events (including Flight) about how Twitter’s platform plays into that space. However, I’ve substantially stepped back from playing a major role in the MQTT community this year; a decision in part driven by the need to refocus on my new role, partly due to some personal hostility and “burnout” with a couple of specific issues, but mostly because – I’m no longer “needed”! It has been incredibly satisfying to see the MQTT community grow over the past few years. The standardisation of the protocol at OASIS, the large number of implementations, and the ability of many other much smarter people to pick up the kinds of speaking engagements I was previously doing as a matter of course – all of these things make me immensely proud to have helped to lay the foundations for the success of that community over the past six years or so.

I’ve also been very happy to see the success of the Cloud Foundry platform and the people involved – having devoted the previous two years of my career to that nascent Open Source community, it is just fantastic to see it take off and the Foundation get started. Nice work to everyone involved.

I’ve again thoroughly enjoyed my speaking opportunities this year, and the chance to broaden my range. Obviously that has included a lot about the Twitter API and developer platform, and lots again about IoT; but I’ve also spoken on wearables, developer advocacy, and API management. I’m very happy that I got to be a part of the first Twitter Flight conference – one of my speaking career highlights.

Personally, I’ve tried to stay healthy this year (no heart scares, no falls…!); although my travel schedule has been demanding again (TripIt tells me I covered 66613 miles in the air). That did at least include a couple of trips for fun, rather than being all about business 🙂

The next year looks to be busy with more events to speak at (and organise!), and much more to do around the Twitter platform. As an historian, a sociologist and someone with a keen interest in the intersection of technology and people, I’m very excited to be a part of this wave of change. 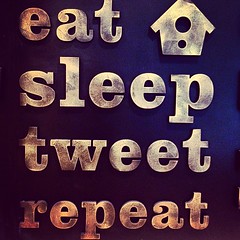 Just a quick note to comment that I’ve added links to two recent interviews on the media section of my Speaking and Media page:

I’ve been at QCon London this week and also did a couple more interviews, again one on each of these topics – it may take slightly longer for these to emerge, though. Let me know if you have any feedback on these, always interesting to hear!

It may seem hard to believe, and indeed looking back at my schedule it hardly seems it, but I’ve been avoiding too many speaking gigs since an annoying incident back in December and a need to take a break! Coming up in the next few months, apart from the job change (!), I’m back on the road and I’ll be speaking at the following events: