Does the term “reverse mentoring” devalue the mentor?

Verb: To advise or train (someone).

If there’s one thing social technologies can teach us, I believe it is this: hierarchies are so 20th Century.

I came across the term “reverse mentoring” today – not the first time I’ve heard it, indeed I was invited to “reverse mentor” an executive myself at one time, but today… it got to me. Far from being an “exciting, unique program”, I think it’s an offensive way of describing knowledge sharing and relationships. It implies a polarity in the relationship, and more than that it emphasises the idea of seniority and implies a lower value in the therefore “junior” partner.

I tweeted about this earlier, and was challenged to clarify by @SuScatty:

@andypiper Out of interest, what would you rather it be called? Do you think the concept works, terminology aside?

So I went ahead and explained:

@SuScatty I don't know… How about… "mentoring"? Works fine. Why imply direction. Mentor / mentee terms do that.

Now, to be fair, the definitions of the words “mentor” and “mentee” typically do refer to age or organisational seniority. However, the key part is surely about sharing experience. Age can be discarded almost immediately – it’s perfectly possible and legitimate for one individual to be in a higher position than another in a company regardless of age. 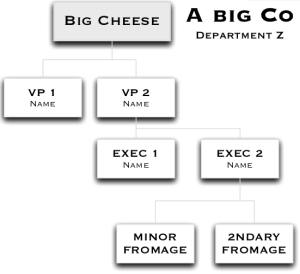 Something I often discuss when I give talks about the transformational power of social tools in the enterprise is that, more and more, it is relationships and open sharing of knowledge that can build innovation and progress in a company. The classic “command and control” organisational structure we’re familiar with was invented by the factory owners of the Industrial Revolution in the 18th and 19th Centuries, and largely perfected in the early 20th Century by Henry Ford and his need to run an efficient production line. As companies grow, this kind of structure causes stratification to occur and silos to form, ossifying the way in which a company can operate. That’s one of the reasons why, at the turn of the 21st Century, some of the more innovative organisations like W.L.Gore, Google and Whole Foods have deliberately eschewed the traditional top-down model. For more on this, I strongly recommend Gary Hamel’s short (and unimpressive-looking, but actually very insightful), book The Future of Management.

Social software and tools can create flatter, more fluid organisational structures, deliver greater productivity and effectiveness, and importantly: build trust. In my own experience, it has done just that. I’ve got a formal management chain that I pay attention to from the perspective of overall direction, vision, and administrative tasks, but I have a heavily cross-functional, cross-divisional, cross-geographical network which enables me to contribute to and draw value from the wider business.

To pick on a couple of random folks in the IBM organisation, who I’m hoping (!) won’t object: by titles, Bob Sutor and Ed Brill are my “superiors”, but the facts are that I interact with them very evenly and freely across social networks, and I imagine that they might choose to seek my advice on topics that I might know more about than them if the need arose. Would I see that as “reverse mentoring”? Not really – it’s advice and support between colleagues, friends, or whatever the relationship might be. Knowledge sharing. I like to think that the exchanges of information between myself and those I provide mentoring to, and those I’m mentored by, are very much two-way – and that both sides benefit by finding support, new ways of thinking and filling out gaps in knowledge.

So back to this idea of “reverse mentoring”. Why isn’t it just about a relationship where a mentor – the one with the greater experience in or knowledge of a particular space – offers the benefit of that wisdom to a mentee? That’s just… mentoring, isn’t it? The other word is redundant – unless you are trying to reinforce that outdated organisational hierarchy you’re clinging to…?

BTW: Bob, Ed… of course, I do bow down to your superiority in all things! 🙂

@andypiper I don't think "Mentoring" would work, given that corporates like to use 5 words when 1 would do 😉