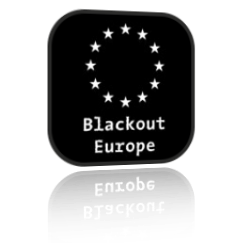 For the past week my avatar image has changed to show one of the logos of the Blackout Europe campaign.

“What’s that all about?”, many folks have asked me in the past few days. Well, as I understand it, this is the situation: the European Union is debating a set of measures called the Telecoms Package. This package is set up such that ISPs will in future be able to parcel out Internet capabilities to consumers in much the same way that satellite and cable TV companies do today – so, for example, there is a possibility that in future you will not pay a flat rate fee and have access to “everything” online, but you might have “starter package” with a certain range of sites plus, say, Skype access, and a “gaming package” which would give you access to various online games services, and a “pro package” which enabled all sites plus any services you wanted. Basically, they will be able to filter what you are doing based on site or protocol – those are just some examples I thought up rather than anything known to be in the works.

How does that differ from Internet packages in Europe now? Well, right now there’s no real differentiation between the services and sites that can be accessed, although there are often speed limits and download caps. This is potentially a fundamental change to the way in which access to the ‘net might be regulated and controlled.

It’s all a bit technical, but for more detail see this page on the Blackout Europe blog and look under section 6 for a set of annotated PDFs which discuss the measures in detail. You can also read the open letter already sent to the EU Parliament.

It’s a hypothetical situation, and as several folks have pointed out to me over the Twitter stream, it might be pretty difficult to actually implement. Other people have pointed out that the site itself “looks unprofessional”, which I suspect is more a factor of translation and time than anything else. I don’t think either of those two issues should really stop people from registering their discontent at these proposed changes. There are forms available on the site to enable people to contact MEPs. I’m late in blogging this, as the deadline is really in the next 24 hours – frankly, I’m surprised that the site, Facebook page and other social networks haven’t attracted more attention.

The press release about the Telecoms package makes it all sound very reassuring and good for the public, but as ever, the devil is in the detail.

Computerworld UK has published a great article on the issue today – here’s an extract:

Unfortunately, it’s an openness that is fairly subtle for non-technical people; above all, it’s not at all obvious to politicians, who seem to assume that apparently minor tweaks won’t change things much.

At least, that’s the most charitable explanation for the fact that European politicians are on the brink of passing legislation in the current Telecoms Package that will destroy a key part of that openness, by allowing telecoms companies to discriminate in the way that they handle IP packets according to their type.

One of the issues that still exists with the EU is the visibility of the institutions and processes at a national level. As a supranational organisation, it’s commonplace for people not to be aware of what is going on in the Parliament, even though in my experience, the EU’s web presence actually provides a great deal more transparency and insight into what is happening in Parliament than many national governments. People tend only to respond to EU legislation once it has been enacted and then re-enacted within their own national context. So, there are a whole bunch of things going on at an EU level that most people in European countries pay no attention to unless they are picked up by the media, and even then only if enough noise is made about the issues at hand.

It’s not too late to take a look at the site, and contact your MEP to let them know how you feel about freedom of access to the Internet – get the amendments that neutralise the offending clauses in “the Telecoms package” passed.

Update: another good article on the detail of the package, again via @glynmoody